Join Mouse on a daring adventure through the deep, dark wood in Tall Stories’ magical, musical adaptation of the classic picture book by Julia Donaldson and Axel Scheffler when The Gruffalo Live on Stage by Tall Stories comes to Flushing Town Hall.

Searching for hazelnuts, Mouse meets the cunning Fox, the eccentric old Owl and the party-mad Snake. Will the story of the terrifying Gruffalo save Mouse from ending up as dinner for these hungry woodland creatures?

The event – which takes place on Saturday and Sunday, February 17 and 19, will also be paired with interactive arts workshops, a fast-moving, enjoyable introduction to storytelling in theatre using games, freeze frames, and well-known tales. You can purchase tickets here.

We spoke with Director Olivia Jacobs about what audiences can expect. 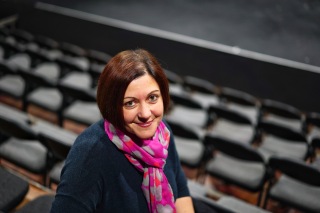 Can you tell us how your role has changed since the first production of The Gruffalo back in 2001?

When we first started working on The Gruffalo, we had no idea that the book would become the huge phenomenon that it is today. We worked on it in a rehearsal room with some fabulous performers trying to find the best way to create the fox, the owl and the snake and of course the Gruffalo himself. After rehearsals we built bits of the set, helped sew bits of costume together and tried to write Edinburgh Festival press releases – all at the same time. We didn’t have a stage manager (one of the cast was always offstage whenever a song started to press play on what was then a mini disk player…) and the set was small enough to fit in the back of a small car. Over the years the show has been really well received and as grown and developed organically. Now we have a fabulous designer (we have just recreated the set and costumes for the show) as well as a lighting designer, stage manager, and understudy (a huge luxury) working alongside our Tall Stories office staff, our wonderful general management team and a press office, etc.

With more people to work alongside Toby (my co-director and co-founder of the company) and me, my role has grown and changed– these days I’m more involved with the strategy and planning and the overview of the company – determining our next productions, new directions and national and international plans than I am with the actual detail of touring.

Within the rehearsal room however, my role remains as it was then – to try to bring together a room full of talented performers and creatives and to facilitate finding the best way to tell whichever story we have set our hearts on.

The Gruffalo has achieved great success since its early beginnings when the original tour involved just three actors in a car touring to schools and small venues. Why do you think the show has been so successful?

We started with a great story. Julia’s words with Axel’s glorious illustrations have become a timeless classic. The basis of the tale, that brains and not brain can win through – and that the little guy can come out on top – is a message that is appealing to any child and to parents too and adds a great deal to the appeal of both the book and the show.

We worked hard to ensure that while we remained true to the spirit of the book we could develop it further – developing the characters of the fox, the snake and the owl and providing them with songs linked to their characteristics. So seeing the show becomes quite a different experience to reading the book.

We also bear in mind that the majority of our ticket buyers are grown-ups – and we try to make sure that the show is just as enjoyable for grown-ups as it is for children. Sometimes I watch three generations of a family all watching the show and laughing together and I know exactly why I love my job. In a world of screens where we move ever further into virtual reality and away from community, it’s fabulous to see the whole family being able to laugh together. Sometimes we grown-ups forget how brilliant it really is to be told a good story well.

How did you get the idea to adapt the story into a show?

My co-director Toby was working at the publishers when The Gruffalo was first published. He showed the book to me and I was, like him, immediately taken with it. It’s such a clear and simple story, but so imaginative too. It gave us space to fill out the characters but a clear structure to work to – it was an instant hit with us.

We did of course ask Julia and Axel’s permission and formally acquired the rights to adapt the book into a play. We met Julia and discussed our ideas with her and she was happy with our plans. When she first came to see the show we sat nervously in the wings. Thankfully she enjoyed the show tremendously – and has been back to see it many times as it has developed and grown.

The wonderful illustrations are an integral part of the book. How did you transfer it to the stage?

The show has actually been through many different incarnations in terms of set. Initially it was very abstract – and small enough to fit into a van. Nowadays the set is most definitely closer to the book, but it still retains the sense of magic and play that pervades the entire show.

Do you think it is important for children to be introduced to theatre at a young age?

In an ideal world going to the theatre would be just as natural and normal as reading a book or watching a film. If we introduce children to theatre at an early age then they can grow up with a sense that theatre is for everyone, and we also have the potential of stimulating the imaginations of the next generation of theatre makers, artists, designers and musicians. Theatre helps you to understand the stories and lives of others and the importance of shared experiences that bring us together.

Why should everyone get along to see The Gruffalo?

Seeing live theatre as a family is a very special experience – we live in a generation of televisions and Xboxes and iPads, but when you go to the theatre and experience something with a whole group of other people of all ages, and it’s live, attention spans change and there is a unique connection between audience members and between the actors and the audience – a connection that you can’t make in film or television. This show is also great fun; there are lots of songs, silly characters, jokes, slightly scary bits and opportunities to join in – something for everyone! See you there!