The benefits of language immersion are well-documented. The more a student is immersed in a language, the more likely that they will be flexible and critical thinkers, better problem solvers, and high achievers.

Flushing Town Hall Education works with bi-lingual master teaching artists from all over the world. They conduct their workshops and residencies in their native language alone, in English, or in both languages. The students they reach reinforce their language learning as they become culturally immersed and gain a greater understanding of different cultures and traditions.

Our current roster of languages span the globe – and speak to our mission or providing global arts for a global audience: French, Hindi, Italian, Korean, Mandarin, Portuguese, Spanish and Taiwanese.

For educators wishing to engage with us, here are our current offerings:

African dance with Vado Diomande from the Ivory Coast

Introduce your students to the rhythms of the Ivory Coast through a combination of dance and drumming workshops, assemblies or residencies. Students are introduced to a series of dance steps that are put together with the drum rhythms. Students also learn how the drum and dancing fit together with live accompaniment. This program can be developed into an 8-week residency with a culminating performance.

Students will be introduced to Kathak- the classical dance of Northern India. This dance is centuries years old and is used to tell

stories that originated in Hindu temples. The dancers become actors who use spinning and posing to tell a story. The diversity of India’s culture and traditions is also demonstrated with a variety of Indian folk dances from the entire country. In each session, students learn Indian dance steps with a focus on storytelling.

Students will listen to blues recordings with special attention to the lyrics which demonstrate the blues’ expressive nature. The class will talk about their own emotions and select one emotion to focus on for the song’s theme. Students will write a sentence or two at a time, ending up with a blues that expresses the described experience in a whole new way. Through the process of turning the emotion into a lyric and a melody, which is then sung with class support, the students experience the process of metamorphosis, and catharsis, through art.

of the music and the shifting of geometric designs with the fans, Janggo (hour-glass drum dance) where dancers play a double-headed drum in the shape of an hour-glass that is strapped to their body while they dance and spin, Sogo Chum (small hand-drum dance) where the dancers move with a small drum in one hand and a stick in the other, and the Jindo Buk Chum (drum dance) a dynamic dance traditionally performed to ensure and celebrate a good harvest.

Many aspects of Asian culture such as art have been influenced by China. Before the collapse of the Ming dynasty (1368-1644) in China, most paintings were done only by educated painters and shared mainly with those in the upper class, in the style of idealized landscapes in black and white. After the collapse, Korea was forced to build new artistic models based on an inner search for Korean subjects. Developed during the latter half of the Joseon dynasty (1392-1897), the last and longest imperial dynasty of Korea, folk paintings called minhwa became very popular. Minhwa paintings were done and shared by ordinary people with vibrant colors and energetic subject matters. These paintings were considered “true view” and decorated almost every household in Korea!

Just like the Chinese language, Chinese dance has its own unique vocabulary and structure that enables the dancer to express their thoughts and feelings. Students will learn about the historical and cultural developments in diverse Chinese dance vocabularies. Each session starts with a warm up followed by a mini repertoire of a specific Chinese dance style(s). Students also have the opportunity to use unique props such as fans, ribbons, and handkerchiefs.

Exploring the elements of earth, wind, water and fire, students will be guided to imagine, design and create their own clay teacups using a pinch method technique. Through the use of arts vocabulary and literacy, students will use their own set of skills that support learning across the curriculum in Geometry, Mathematics, Ceramic Technical Language, Physics and Earth Science as part of their work. Connections to cultural, social, and historical contexts in clay works will help students gain a better understanding of the work, while acknowledging some links to their community and experiences on the subject of pottery making. 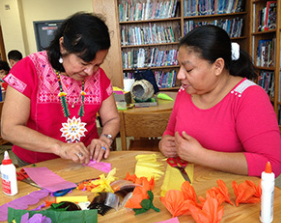 Most people think of piñatas as a fun activity during a party or celebration. But, did you know that the history of piñatas show that they were made to be more than just a game? In this workshop, students will learn about the history and create their own traditional Mexican piñatas using vibrant colored tissue paper and a ready-made papier-mâché structure.

In this interactive program, students receive an overview of traditional Mexican folk dances as they learn simplified movements from dances such as little old men- a four hundred year old indigenous dance, Jalisco, and El jarabe tapatio- the world famous Mexican hat dance! Students will also have the opportunity to wear traditional dress such as hats, fan handkerchiefs, and folkloric dresses.

An overview of native Andean music from Bolivia, Peru, and Ecuador demonstrated through a live demonstration of several percussion, wind, and string instruments, followed by an interactive instrument-making workshop where participants will have the opportunity to build a pentatonic panpipe called palla. Students will also learn how to play simple Andean melodies.

Nutrition and healthy eating with Christina Camacho from Peru

Engage in a discussion of healthy eating through the preparation and demonstration of how to cook quinoa: a high-endurance aerobic-efficiency food with an amazing nutritional food profile, also known as a “supergrain.” Most people including vegetarians, vegans, and those with cereal grain allergies can base their diets off this delicious food that is easy to prepare and high in protein. With an emphasis on seniors, a focus is drawn on how to achieve a balanced nutrition, keeping your bones strong, why being physically active is important, and how to eat healthy on a budget. Food samples are available.

Learning to write in an artistic way is a wonderful way to learn about ancient China and its culture. Chinese Calligraphy is the highly regarded fine art of writing dating back thousands of years. Using traditional ink, brush pens, and ink stones, students will replicate some of the various characters found in these long-established and honored writings.