In just a few weeks, Flushing Town Hall will present a special event, A Symphony of Chimes. The piece of work was created by Queens resident Skip Laplante. Skip received a grant from the Exploring the Metropolis Con Edison/FCCA Composer-in- Residence program, and has assembled hundreds of wind chimes that will create beautiful music on May 1st.

Today, AM New York featured Skip, and you can read the full piece here or below. (And then you can watch the video created by Con Edison here.) 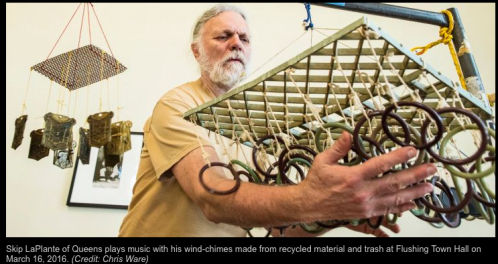 “We think too narrowly about what objects can do,” LaPlante said. He composes his own music to play this symphony of trash that gives a gentle homemade sound when pushed and touched by fingertips and hands — creating melodies and soothing rhythms. Occasionally, he throws a strong back kick at the industrial-size plastic trash for a deep bass sound.

Tall and lean, LaPlante, 64, hunts for eye-catching household garbage left curbside. He dives into Dumpsters for intriguing factory assembly-line objects that may be deemed garbage to the common person but for LaPlante they are mechanisms of new music.

On Tuesday, trash day, LaPlante’s garbage walking expeditions begin at his Ridgewood, Queens, neighborhood. He walks over the Williamsburg Bridge to SoHo in Manhattan, keeping an eye out for the obvious and weird.

“One night I was Dumpster diving when I found these pipes. I didn’t know what they were or where they came from. But I packed them into my backpack. I had all these pipes sticking out from my back. I looked like a giant pheasant walking through the night,” LaPlante said, adding police peered at him suspiciously when they drove past him.

“They didn’t dare stop,” he said laughing at a recent interview at the Flushing Town Hall theater in Queens. There he will perform his own musical composition along with a troupe of dancers on May 1. The concert is free.

LaPlante will play 130 wind chimes that make up several thousand pieces of discarded rubbish such as old campaign buttons, aluminum ties from broken lobster traps to cable spreaders used to keep electrical lines separate. Some of the pieces date back to the 1970s, including a silver pie server and ladle that give off a delicate tinkling sound at the slightest touch.

LaPlante grew up in Needham, Massachusetts, playing the cello, the bass and piano. Though he is a Princeton music graduate, he does not stand on ceremony or pretension. Music is “primal,” he said. “That’s what makes it fun. How can you possibly make a mistake? It’s a chance to explore.”

“We love this because it doesn’t sound like anything we have heard,” said David Johnston, executive director of Exploring the Metropolis Inc., which awards grants to New York City musicians and artists. LaPlante was given a $2,500 grant in September. “All the panelists who selected Skip, some who have classical academic backgrounds, felt his music was exciting. There is something aesthetically beautiful.”

LaPlant’s homemade instruments also include Indonesian gamelan pieces that have been exhibited at the Smithsonian Institution, the American Museum of Contemporary Crafts and PS 1 in Queens.