Will you cast your vote to help Alsarah? 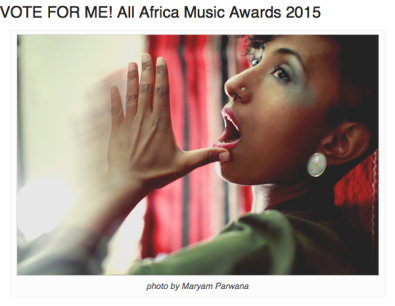 She is a Brooklyn-based singer and songwriter who is slated to perform with us next April, and she’s in the running to become the All Africa Music Award’s “Best Female Artist in Eastern Africa”.

You can vote for Alsarah – a Sudanese-born singer, songwriter and ethnomusicologist, and a self-proclaimed practitioner of East-African retro-pop – until November 5th by clicking here.

Alsarah & the Nubatones, which released their debut album Silt / طمي in March of 2014 via Wonderwheel Recordings, will perform as part of Flushing Town Hall’s World Music series on April 23, 2016.

Born in the capital city of Khartoum, Alsarah relocated to Taez, Yemen, at age 8 with her family to escape the stifling regime in her native country. She abruptly moved to the United States in 1994 when a brief civil war broke out in Yemen.

She most recently has been working with The Nile Project and was featured on their debut release, Aswan (named 1 of the top 5 must hear International albums of 2013 by NPR), and collaborated with French producer Débruit on the album Aljwal, which was released this past November via Soundway Records.