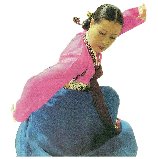 The Flushing Council on Culture and the Arts’ Education Department provides a broad array of quality programs and develops new initiatives that promote the arts and cross-cultural, creative curriculum-based learning in Queens and beyond. This summer, we’ve been proud to introduce a six-part lecture and dance workshop series, called Dance in Queens.

Each week, we touch on another culture that is part of the fabric of Queens. This week, we introduce you to Song Hee Lee in advance of her presentation on Flushing’s Koreatown and Korean Dance on July 30th.

Upon graduating from University of Pusan, Korea, Song Hee Lee joined the Pusan Metropolitan Dance Company and became principal dancer. In 1997, she had her first solo recital in NYC at the Hudson Guild Theater.

Since then, she has been actively performing around the world and US, at such venues as Flushing Town Hall, Greek National Dance Theater, CID UNESCO World Congress on Dance, NEA Montana Folk Festival and International Festival at Chihuahua, Mexico.

Currently, Song Hee is Artistic Director and Choreographer for the Songhee Lee Dance Company which includes the children’s dance initiative, Cheongsah Chorong; she is also an instructor at Lotus Music and Dance school and performance member of KTPAA “Sound of Korea”.

Tell us about your personal journey to Flushing.

Personally, Flushing is the starting point of my life as an immigrant and is my second hometown. Flushing is a suitable area of disseminating and learning Korean traditional dancing, and not only culture, but also the population gathered together in this area, consisting of Asian people such as Chinese and Vietnamese, so that they have been trying to make an effort for spreading and maintaining their culture and arts.

How large is the Korean community in Queens and in Flushing?

Flushing, Queens, the central of Korean community in New York, with an approximate 250,000 population, may become a supply source of Korean culture and K-POP. The food street (MUKJA GOLMOK) around 150th Street and Murray Hill is rapidly becoming a focal point of Korean food and culture, heavily influencing Korean cultural development.

Describe the traditional Korean folk dance that you will discuss during the program.

Sogochum – (Small Hand Drum). Sogochum, one of the most popular folk dances is a dance with sogo, a small hand drum about 15 inches in diameter. The dancer holds the drum with a small attached knob in left hand and beats the drumhead with a stick with the right hand.

What do you hope participants learn during your session?

I hope that, through Dance in Queens, many different ethnicities and cultures get together and learn about Korea and its culture, spreading it all throughout the world.